This year’s (2016) presidential candidacy and debates had some folks roused and alarmed. While others couldn’t help but to laugh at some of the most hilarious things to ever come out of the mouths of the last two standing candidates. One of which will be the next President of the United States.

Now that the presidential debates are over, (the exhaustion) and only two weeks away to cast your vote with hopes for the right person to become President Barack Obama’s successor. One has to rejoice that the agonizing pain of watching Hillary Clinton and Trump going at it is slowly creeping to an end, as they constantly throw jabs at one another over the needs of the American People.

Still with the uncertainties as to which one will be victorious come November 8th. SLU is sure the people are in desperate need of relief from the stress in choosing the new president. The solution: MOORE LAUGHTER!

SLU interviewed Angela Moore of Moore Laughter Entertainment and got a kick out of her answers about being a comedian. Read below what she had to say about hecklers and the advice she’s gotten from seasoned comedians in the business.

The funny comedienne has been seen on News One Now: Wild’n out Wednesdays and performs around the beltway in the D.C. Metropolitan area.

Laugh along with SLU and Angela Moore as she talks of her experiences in making us laugh.

How did you land into comedy? Comedy found me, I started doing comedy as a way to deal with difficult challenges I was experiencing in life.

Do you write your own routines? I write my routines from personal experiences I encounter, stories people share with me, and from my creative and exaggerated thoughts (that may or may not be true). If I use stories I see online or circulated stories I will tell my audience “I did not write this story, but it is something I have heard”.

Have you met in person, any of your biggest influencers? Yes, when I was in college I met Sinbad and took a picture with him.  This is way before I ever thought about going into comedy.

Who has been your biggest fan/supporter? I have a friend of mine that was at my first paid comedy performance, she tries to come see me when she can, but is always encouraging and has given me referrals.  My parents saw my first performance, and they come to see me when I invite them.

Where are some of the places you’ve made the crowd laugh? Well I always bring on the laughter, whenever I perform.  Every performance is different, the goal is to have them laughing from beginning to end, and others may laugh at certain parts. 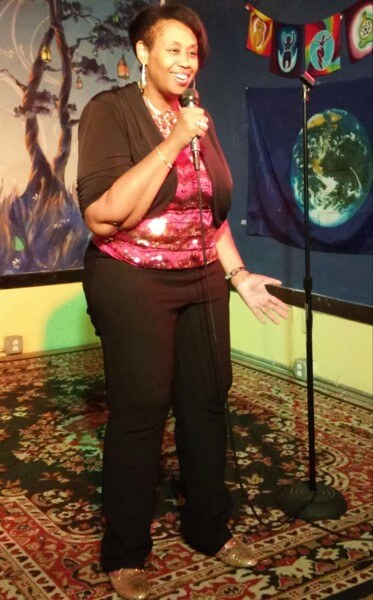 What are some secrets for telling jokes to get the biggest laughs? Probably to know your audience, being confident in your delivery and knowing your comedic material.

What’s the best way to deal with hecklers? Say something that will make the heckler shut-up, like making fun of them.

How difficult is it to write standup material? That’s a hard question. It just depends on what I encounter, I was advised by a veteran comedian to try and write something every day.  Sometimes that happens, sometimes it doesn’t. I keep a notebook in my purse incase a joke comes to me.

If you had a vanity license plate, how would it read? I actually did have a vanity plate, and it was my comedy business: MO LAFTER.

Does it get easier developing jokes for standup? That is hard to answer; I have tons of notebooks filled with my comedy and jokes I’ve written. Some I have performed, and some I haven’t.

What is your ultimate goal for standup? My ultimate goal for stand-up is to be the person that people think of when they think of a hilarious female clean comedian of the millennial, and to travel around the world doing comedy and perform at one of the major theaters in Washington, DC (Warner Theatre or Constitution Hall, etc.) to a sold out audience.  DC is my hometown.

What advice would you give a new comedian? My advice is to get on stage as much as possible, the more you get on stage, the better and more confident you will get with the craft of stand-up comedy.  That is what many comedian veterans have told me, and that is what I try to live by and share with others.  Also be yourself, don’t try to be like other comedians or copy and deliver other people’s jokes.

Thank you Angela Moore for cheering the people of America up! It is much needed.

2 thoughts on “Side Splitting Laughter with Comedian Angela Moore”

This site uses Akismet to reduce spam. Learn how your comment data is processed.